October 30th: An Epic Date For Hank Williams and his Jr.

Hank Williams Sr. and Hank Williams Jr. are high-end personas in the music industry. Their songs are proof that they are the best in the business.

He is acknowledged as one of the greatest country artists of all time. His evocative and poetic songwriting inspired many performers. However, Hank’s success came with a price. He was a heavy drinker since his late teens. Hank began showing up for concerts drunk and sometimes didn’t show up at all. The Grand Ole Opry suspended him from appearing at live shows.

He died at the age of 29 in the back seat of his limousine.

In his early years, Hank Williams Jr. stood in his father’s shadow. In 1974, he created his own musical identity, combining country with Southern rock and blues. Williams Jr. was severely injured in a mountain-climbing accident in Montana in 1975. It took two years to reconstruct his face. The accident resulted in Williams’s new trademark look, which included a full beard, cowboy hat, and dark glasses. His career started to become successful in the ’80s.

In October 1982, Williams Jr. had nine albums on the Billboard music charts. Hank received 16 songwriting honors from Broadcast Music, Inc. He had 10 No.1 singles, 13 No.1 albums, 20 gold and five platinum albums and double platinum.

In 2006, a janitor working for Sony/ATV Music Publishing claimed to have found Williams’ unfinished lyrics inside a Sony-owned dumpster. She said that she had sold Williams’ notes to a representative of the Honky-Tonk Hall of Fame and the Rock-N-Roll Roadshow. She was then accused of theft, but the charges were dropped when a judge determined the janitor’s version of events to be true. The unfinished lyrics were later returned to Sony/ATV, which handed them to Bob Dylan in 2008 to complete the songs for an album release. 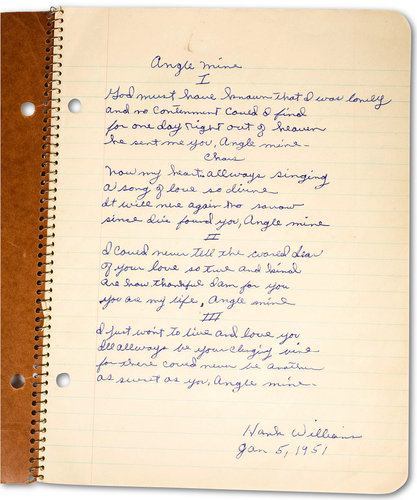 Maybe it was a coincidence but October 30 reminds us of the gift Hank Williams Sr. and Hank Williams Jr. have for us. Their talent enabled them to win awards and write songs. The products of this talent are masterpieces to be kept safe- for they are priceless.

Watch the father and son here: