Angels are actively involved in our lives. They have specific roles and it is a blessing to have God send angels in response to our prayers.

God’s angels don’t draw attention to themselves as they perform the tasks they were given. God also called the angels to work in our lives in very profound ways. 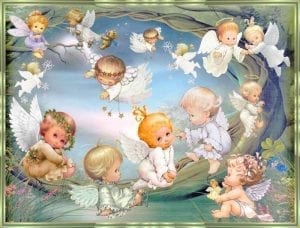 This was perfectly described by Deana Carter in her song ” Angels Working Overtime.”

It is a song written by Michael Dulaney and Michael Lunn. It was released in April 1999 as the third single from the album Everything’s Gonna Be Alright. “Angels Working Overtime” was Carter’s eighth Top 40 hit, with a peak position at number 35 on the Billboard Hot Country Singles & Tracks.

It describes the journey of a girl who was abandoned by her birth parents. She grew up in a prairie town where she felt out of place. She ended up in LA with a boy whom she spent a passionate evening with.  It is unclear if they started a family but the video shows she found happiness and a sense of belonging in her baby, thanks to “angels working overtime.”

The video follows a baby who is left with a locket and a note by a couple in a diner. The baby grows up in a prairie town where she feels out of place. When she turns 18, she boards a Greyhound and ends up in Santa Fe. She tags along with a boy to L.A. whom she has a moment of passion in a motel room. Deana Carter is shown throughout the different stages of the girl’s life; she is seen examining the locket, sitting in the front seat of the parents’ car, and leaning against the front of the bus. Carter represents the angels that have been watching over her.

Psalm 34:7 says, “The angel of the LORD encamps around those who fear him, and he delivers them.”

Deana’s time in the spotlight has had its share of ups and downs, but it is her faith in God that has kept her centered.

“This is a tough business to hold on to core values but I understand God has a sense of humor and expects us to have fun. You just can’t forget who is in control and who we serve when it’s all said and done. No matter what type of work you do, life is not easy but having a relationship with God makes the journey easier.”

In her own small way to give back for the many blessings she has received, Carter offers up a regular faith-based TGIF-isode on YouTube on most Fridays.

“I’m just trying to do my part to spread the Word. We all struggle with flesh versus faith. It’s just me in my dining room sharing simple conversations with viewers. I’m not trying to be overly reflective, just share stories, pray a little, and include a Word from God.”

She is also active on Facebook. On October 19, 2019, she posted a picture and a message about trust in God.

On her Facebook, Deana said: “Do not forget that God is in control. TALK to Him. He’s GOT THIS! He LOVES you. #keepthefaith” via Facebook.com

We thank you, Deana Carter, for continuously spreading the Gospel. You are truly an angel. We miss you and we are hoping to hear from you again!